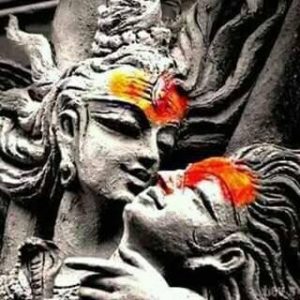 Several years ago, when I was finishing a PhD and at the same time a very passionate seeker (I still am), I was a member of an informal study group, consisting of a Catholic priest who was also a Sanskrit scholar of Tantra, a refugee Tibetan Buddhist monk, an Australian swami,  my Hatha yoga teacher and myself — the only woman.

The object of our study was the mysterious Kula Ritual. The meetings took place once a month and continued for over 18 months, and since then I have been fascinated by Tantra as a philosophy to live by and as a form of pantheism; e.g. a type of spirituality or even religion that embraces everything and judges nothing.

(I have since written a novel on the progression of romantic love to Tantra and spiritual love, and still tweak it sometimes to please the publishers’ needs for ‘stronger plot development’.) 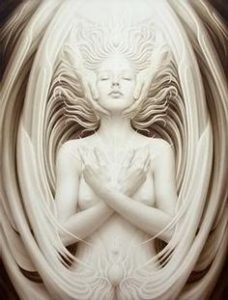 The Kula Ritual is an apparently ‘scandalous’ ritual where the male disciples of a guru of Tantric lineage take part in a sexual ritual with women who are strangers to them and who are not to be related to them in any way emotionally.

To briefly summarise the premise of Tantra, Tantra says there is nothing which is not sacred. Or to simplify this colourful language, Tantra is based on the premise that everything is sacred. That every thing and every action we undertake can potentially merge us with the divine principle of creation and thus can be sacred, if performed consciously and respectfully.

In order to delve deeper into the meaning of the ritual we need to also understand how radically different the Tantric view of the Divine Feminine is from that of all other religious traditions, including even Hinduism itself, from which Tantra sprang.

If we follow scholarly writing on the Divine Feminine in Hinduism, we learn that originally (and this is no different from other religious traditions) the Divine Feminine had a prominent role and place in ancient folk beliefs. Indeed, Shakti (the Goddess) was understood as the deity to which all prayers were directed.

However — and I will not get into the history of India here — with the arrival of Brahmins this all changed. They came with their caste system and rules and, not surprisingly, 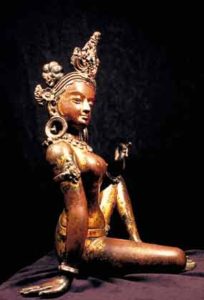 positioned themselves not only as the most important caste but also as the only true interpreters of the Divine. As a result, the original Hindu folk beliefs which were organic and not hierarchical were replaced by a complex system tightly controlled by the Brahmins.

Suffice to say that the Brahmins quickly dispensed with the Goddess Shakti as the Divine Feminine, and when they could not get rid of her completely they gave her a subordinate role of the wife of a male deity. She became the adoring wife who asks questions, which he answers wisely, thus enlightening her. Convenient, is it not?

However, the ancient beliefs were difficult to repress, and now and then the vengeful side of the Goddess would pop up — a side the Brahmins hoped to repress but could not — in the form of Durga or even Kali, whom anyone in their right mind would listen to and obey if they wanted to live!

Why is this important to know?  Well, because it sets up our archetypes and our role models for us; it is no coincidence that women still primarily see themselves and their value in being someone else’s partner or wife – just like the Goddess, whose power was stripped from Her. 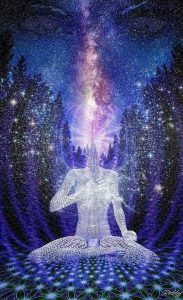 But Tantra went against the stream of Brahminic repression — and brought the Goddess Shakti back!

John Dupuche, a Tantric scholar, says that in Kashmir Shaivism, which embraces the principles of Tantra, Shakti has become again ‘the ultimate source of reality’. Without Shakti nothing happens in the Universe.

Given this, we can see why the male disciples needed to participate in the sexual ritual with women.  Women in Tantra hold the secret to Life, are capable of an act of creation. They give life and, most importantly, they carry the Goddess within them. 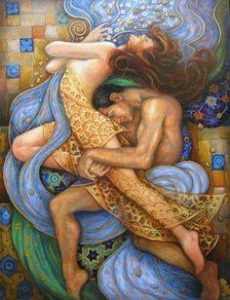 which are the stuff from which life is made. Moreover, women’s sexual organs replicate the movement of the entire Universe.

Thus, to be involved with a woman in a sexual ritual (which is highly controlled and preceded by the required purifications that clarify the spiritual intention) is to touch the power which created Life in the Universe.

Now that is a philosophy that gives power back to the Goddess, right?

When sitting in our informal but intense study group and discussing Chapter 29 of the Tantraloka of the great Indian philosopher Abhinavagupta who, although a Brahmin himself, regularly but secretly  participated in the ritual, I would ask my male colleagues (all priests, swamis, scholars and monks): what about women in the ritual?

As the women participants were supposed to be strangers to the male disciples and were often from lower castes (deliberately so in order to dismiss the Brahminic distinctions between higher and lower, pure and impure), what happened to them after they were worshipped as the embodiment of the Goddess?

Surely, I asked, there were no contraceptives used then? Who, therefore, carried not only the Goddess but also the burden of the consequences of the sexual ritual?

Not the male disciples, who were only initiated into the ritual in secret and who could have no contact with the women afterwards.

Even more disturbingly: did the women, especially the ones from lower castes, have any say whatsoever on whether they wanted to participate in the ritual? Were the aware of the consequences?

These are interesting questions about the ritual, to which my male colleagues said they had no answers.

So I would like to end this blog with this question: the Kula Ritual as it has been practised gave — only theoretically — power back to the Goddess, but has it respected the women who embodied the Goddess?

to the Goddess, but now this voice and the control over this voice has to be given to the women who carry the Goddess within them.

Without them, it is not Tantra (which treats everyone the same and embraces all). It is only another exercise of power over the Divine Feminine.

I would really like to hear from you on this one 🙂