On the Writing of a Novel 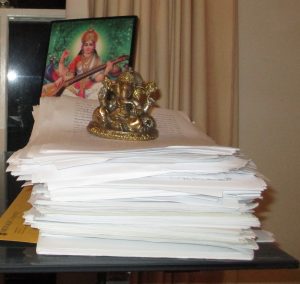 I am sure exactly when and how I decided to write my novel.

The idea for the novel came to me the same time as when I finally sat down to write Jerusalem Diary; that is in December 2007. But I was busy with Diary, and a number of other things had had to happen first. Among them was joining a small study group in 2004 that consisted of a Catholic priest who had just translated a controversial Tantric work from the 10th century (The Kula Ritual), a wandering swami and I.

The translator/priest suggested that we study the Tantric text and we agreed. Once a week for a year and a half we met in the house shared by the priest and swami to delve into the difficult and fascinating text which espoused the idea of sexual practice which could lead to an expanded state of consciousness. Sexuality and spirituality – now that is interesting I thought, although I probably would not have verbalised it this way back then.  My personal and professional lives were a mess at the time. I was involved in a tumultuous love affair while at the same time I was finishing my PhD. The study group gave me focus and satisfied my natural inclination towards esoteric and unusual topics.

Sometime in 2005 we finished The Kula Ritual and the group dissolved. That could have been partly my fault because soon after I had completed my PhD I met two Melbourne men who claimed to have discovered a new site for the tomb of Jesus, and I went with them to Jerusalem to record their findings (as well as striking a book deal with the trust they represented). After that, for two more years; that is, until about 2009, I was busy lecturing as a sessional at various universities and writing Jerusalem Diary. The story of that book is the subject of my previous blog and I am not going to repeat it here. Suffice to say that in 2012 I found myself fully employed by one university, and my personal life had settled (surprise!).  Now I was beginning to obsess with the idea of a novel which would aim at changing our perception of sexuality as ‘dangerous’ and, most of all, ‘sinful’.

I was charmed by the premise of The Kula Ritual that sexuality could be used as a means of expanding consciousness and even enhancing our spirituality – something that no organised, traditional religion would admit. I conceived the idea of writing a novel which takes place in the beautiful town of Melaka which I had visited several times when I was a lecturer in Malaysia.

But how do you write a novel when you are a fully employed at a demanding profession?

I made a promise to myself (and I still stick to it) to get up at 5 every morning and write until 7 or 7.30.  I did not give myself any word limit because I wanted the inspiration to flow freely; I was afraid  that over-disciplining myself would backfire. So I had a time limit but not a word limit. Sometimes I wrote only about 170 words but other times over 700 words.  Both instances were rare: my natural word count per morning was about 360 words, and I did not put any pressure on myself to increase it. In about a year or a year and a half I had the first draft of the novel, and I even had a title for it – The House of the Beloved.

Those mornings were the happiest and most magical moments of my life. Call me a romantic, but I felt connected to some universal creative source as characters appeared and wanted to talk to me – they wanted to come to life and were using me to do so. There is no other way of describing what happened. Some of the characters, in particular one called Reyes, had appeared to me many years ago when I still lived in Toronto and was experimenting with writing of a novel which I abandoned after 100 pages.  In Toronto I knew that I had a general feeling for the structure of a possible novel but the essential philosophical content was missing. Now I had that content and Reyes returned.

He was exactly as he had been in Toronto: charming, mysterious, wise and unconventional. Indeed in Toronto, he could have been taken for a Gypsy. He is not a Gypsy  in The House of the Beloved, although close enough – he guides the heroine to her new understanding, often in mischievous and unconventional ways. Other characters were new to the novel but old friends otherwise, as they  were historical figures who had fascinated me for years. They included romantic figures such as Heloise, Baudelaire, a Sufi mystic and a Tantric philosopher who wrote The Kula Ritual called Abhinava. Abhinava, like Reyes, was very outspoken in our morning meetings and had a very clear sense of how he wanted to be presented. Sometimes, we argued about this and I had to explain to him that I needed to make some very essential adjustments to his expressions to make him more approachable for a modern readership. ‘You see, ‘I would tell him morning after morning, ‘people nowadays don’t necessarily relate to Sanskrit terminology and aren’t really open to the idea of reaching enlightenment through sexual practices. Imagine sarcastic literary critics who are fixed on literary theories and obsessed with ‘’voice”, even if that voice says nothing of interest. ’

I found it challenging, as this part was more about controlling the text than listening to the text. It was not about how the text wanted to be anymore but how it could be to fulfil its promise as an unusual, philosophical and beautiful novel about sexual desire and where it can take us. Ours was not a mystical union anymore; it was damn hard work. But I got up dutifully every morning and worked on it. And now, I think the crafting is finished too.

But is a novel ever finished?

I sent a copy to a literary agent in New York and Sydney-based agent. The New York agent had hoped for something more erotic but liked the general idea which, she believed, needed more work.  She gave me a few pointers and I re-wrote the first two chapters (and she was right – the novel is much better now). I wrote to the Sydney agent and ask her not to read the previous version of my novel and read the corrected one instead. (I hope literary agents are used to the madness of writers when the quality of the work is at stake).

Recently, I also sent the novel off for a literary competition; if successful the novel will have input from a literary editor who will work with me on it again. And as I am writing these very words, I have made small re-writes to chapter 15, and I might also smooth parts of chapter 3. This is how it has been for me: from dreamy ideas, from persistent characters to romantic meetings at dawn; from the hard work of crafting to harassing agents and publishers until they see the beauty and wisdom that is there.

What can I say? You have to believe in yourself and, if not in yourself, then in the quiet persistence of the ideas and characters that want to be known. You owe it to them.

3 Responses to On the Writing of a Novel