Nomadic Tendencies: a History of Wanderlust 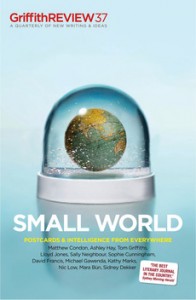 My second piece of literary non-fiction published by Griffith Review plays with Bruce Chatwin’s idea of wanderlust as a natural human impulse, as primal as the desire to settle. I go back through history to argue the case for the desire to travel and explore, spicing it up with accounts of my own travel adventures.

Below is an excerpt of Nomadic Tendencies: a History of Wanderlust:

ON my thirtieth birthday – a while ago – a friend showed me a cartoon parody of a high-school reunion. It depicted a group of thirtysomethings reuniting two decades after graduation. One of them boasted, ‘I have a secure job, a spouse and a good retirement plan. What about you?’ The person next to him answered, ‘I climbed the peaks of the Andes, lived with the indigenous community in the Amazon, and photographed a pride of lions for National Geographic.’ I was aware this was only an exaggerated parody of life-choices and their consequences, but I also instinctively knew which choice I had already made. Since I can remember, I have wanted to travel. I was born in communist Poland where little travel was possible, yet I spent hours reading books about faraway lands, dreaming that one day I would visit them. My uncle was a sailor and I worshipped him. He was a mysterious and adventurous figure, removed from the mundane normalities of life. In my imagination I saw him visiting islands that looked like pearls scattered on the crossroads of the oceans. His room was always locked and I imagined the treasures that must have been hidden there. Since then I have lived, worked, studied and travelled extensively in both Americas, the Caribbean Islands, Asia, the Middle East and Australia. Even now, having settled in Melbourne, I am still guilty of nomadic tendencies. It is not just a love of experiencing new places that drives me. It is an inner impulse irresistible in its power; an intuitive knowledge that travel is the key to who we are.

It was not until I entered academia, first as a student, then as a lecturer, that I learned of the fashionable assumption that wanderlust is a modern invention. Undoubtedly, new technological advances in transportation and information technology have helped us to move around with greater efficiency and speed and to more easily visit faraway places. Not only do more of us travel, but even more people would like to participate in the great movement of people and capital. Terms such as ‘global nomads’ and ‘ethnoscapes’ have a stronger presence in our lives than a decade ago. And although I admit this is true, I also believe that the desire to travel is as ancient as human imagination. Human beings have always loved to move from place to place. Irreverent as it might sound, wanderlust is not a modern invention or, as some would have it, a modern malaise. It is a natural state of being for us. In our hearts, we have always been nomadic.

The first time I came across a theory for our nomadic tendencies was while reading Bruce Chatwin, a charismatic traveller and writer. Travel and writing about his journeys were the main themes of his life, and more than once he quit prestigious jobs to satisfy his lust for wandering. As a young man, he left his position as the director at Sotheby’s in London to live among the nomads in Africa. A few years later, when employed as an art critic at The Sunday Times, he suddenly disappeared, leaving a telegram for his employers, ‘Gone to Patagonia. Back in six months.’ The text of the telegram is now legendary among Chatwin aficionados, even if not necessarily verifiable. His ideas of what he called ‘the nomadic alternative’ were first mentioned in his book In Patagonia (1977)[i] and later elaborated on in The Songlines (1986)[ii], a poetic travel book about Australia.

According to Chatwin, even in its earliest stages human society was divided into ‘nomads’ and ‘settlers’. The first clusters of settlers, Chatwin argues, were not a sign of our progress, but rather a tragic turn of events; a choice that for a time took our civilisation in the wrong direction. Settlers have always had different priorities and sets of values than those of nomads. The settlers valued stability and the accumulation of goods. In fact, it is the desire to accumulate that forced early societies to settle down in a particular place. How could they continue moving when they carried more and more baggage? Every traveller knows the dangers of excessive baggage. The nomads, on the other hand, valued their freedom above all. They provided for their needs on the move, carrying with them only that which was necessary and did not impede their movement. In The Songlines, Chatwin traces the threads of the human need for movement and concludes that wanderlust is a primal instinct, irreversibly connected to the search for our origins and the answer to the question, ‘Where do we come from?’

The answer, according to Chatwin, is found in excerpts from a collection of his notebooks included in the middle section of The Songlines, filled with quotations from Baudelaire, Pascal, the Desert Fathers (early Christian Saints), the Hindus, Taoists, plus Sufi and Aboriginal wisdom from around the world. Here Chatwin agrees with Baudelaire that it is not homeliness which is our natural state, but rather its opposite, la grande maladie de l’horreur du domicile or ‘the horror of domesticity'[iii]. Never one to be accused of a lack of desire for controversy, Chatwin proclaimed that ‘psychiatrists, politicians and tyrants’ want to convince us that ‘the wandering life is an aberrant form of behaviour, a form of neurosis’, forgetting one ‘universal concept: that wandering re-establishes the original harmony which once existed between man and the universe'[iv].

Now Chatwin was no stranger to embellishing facts and scholarly research with a healthy dose of his artistic imagination. This was partly why his books have proved so popular. However, it would be unintelligent to deny a poetic truth simply because it requires a radical departure in imagination from accepted wisdom. Even in ancient times, the call for adventure, which always required leaving home and extensive travel, was explored in great myths that helped to shape cultures from around the world. Joseph Campbell, in his book The Hero with a Thousand Faces (1949)[v], analysed stages in heroic journeys as part of ancient myths from around the world. The first requirement for each journey’s protagonist(s), regardless of their geographical or cultural origins, has always been the ‘call to adventure’. This ‘call’ is often heralded by an encounter with an unusual creature or a mysterious place which challenges and fascinates the protagonists and, ultimately, prompts them to undertake an adventure away from home and familiar settings. The movement away from home and the call for adventure in faraway lands is always the same, irrespective of whether the protagonist is a hero of the Greek myths, such as Odysseus or his son Telemachus from the Odyssey, Jason of the Argonauts, or an Arapaho girl from Native American legends.

The rest of Nomadic Tendencies: a History of Wanderlust, can be read on the Griffith Review website.