Explorers, Writers, and Other Creative Strangers 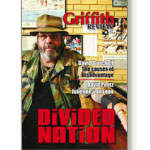 This is a spirited essay based on a chapter from my PhD (published in 2010), and applies a different look at immigration, attempting to debunk some old-fashioned migration theories. I argue that the desire for travel, exploration and creative expression is just as important a motive for migration as any economic reason.

This article was republished by the weekend edition of the Financial Review in April 2007.

Below is an excerpt of Explorers, Writers and Other Creative Strangers:

In the immigration office in Paris, I had one chance to convince the person in charge why I should be allowed to stay. Someone in the waiting room cried as he was handed his deportation papers. People of all nationalities, and their children, waited their turn. When it was my turn to face the immigration officer, I was determined to show that all was fine, that I was worthy of staying, that I was non-threatening. But something betrayed me to the woman in charge. She looked at me with professional suspicion.

“Why are you here? We have enough people from your country, from every possible country, staying here illegally. You have no money, I suppose?”  “But yes, I do. A little. Just enough,” I whispered.   “Just enough for what? And how have you earned your money without a working visa?”

How could I explain to her that I dreamed of a fuller life? This was inexplicable within the confines of her world. That people worked illegally because they could not work otherwise. That I walked the streets of Paris whispering verses from Baudelaire wanting to breathe the air that Modigliani and de Beau-voir had breathed. In her eyes, I was an Eastern “barbarian” at the gates of Paris, who came to deceive and take other people’s jobs. My imagination ran wild. Was it the stamping of Cossacks’ horses on the Eastern steps that she heard when I was answering her questions? Did she disapprove of the freezing winters drowned in glasses of vodkas drunk by my ancestors? Was it something about my Eastern European face? Eyes too big to be fully civilised? Or was it the “red curse” that worried her?

Under any other circumstances, I would not identify myself with these symbols, but then I wanted to throw them back at her to mock her suspicion and rejection. To mock the system that categorises people, a system too restrictive to define anything of significance about another person except as an “intruder” with low economic assets. How could the questions on an immigration form encompass the qualities of Slavic vitality I love, or the writers who created the cultural narrative in which I grew up, or the adventurers and revolutionaries who shaped my imagination?

Similar incidents happened in North America. There, people put me into the category of vodka and sausages when they tried to be friendly. My American friend with a degree from Berkeley was surprised that there was “Polish literature” despite Czeslaw Milosz, a Pole and the 1980 Nobel Prize winner for literature, teaching at her university for decades.

An ironic reversal of roles took place some years later in Southeast Asia, where I suddenly became a “rich Westerner”. My young, soft-spoken guide took me to remote temples in Cambodia and confessed on the last day of my trip how angry he was about “serving rich Westerners” like me. He believed (wrongly) that I had enough money to smuggle him out of the country to find a better life in the West. I understood his dreams. Like myself years earlier, he too religiously studied French and English. He wanted to see the world and be a writer.

I knew that feeling. After the incident in Paris, I knew that there was a very long and treacherous bridge that a stranger and a foreigner must cross. A bridge crowded by rigid rules of “rich” and “poor”, of desirable and not. I knew that the bridge led to another side of being, an open-ended and creatively intuited belonging unfolding in front of me. This thought exhilarated me.

I wanted to explore other possibilities of being and belonging.

The rest of “Explorers, Writers and Other Creative Strangers”  can be read on  the Griffith Review website.